Learn about the legal process and get past the legal jargon so you can focus on reform.

Use the “How a Lawsuit Works” tool to explore the basics and review the Terms to familiarize yourself with key legal terms and procedures.

How A Lawsuit Works

During pleading, the plaintiff submits a complaint to the court alleging injury caused by the named defendant and the defendant has a specified amount of time to file its answer.

What is involved in a pleading?

During pleading, the plaintiff submits a complaint to the court alleging injury caused by the named defendant. Once the defendant receives the complaint, it has a specified amount of time to file its answer. The defendant may also file a motion to dismiss, which must show that even if the allegations made in the complaint are true, the law does not sup- port liability. Motions to dismiss are rarely granted and, when there is a deficiency, it is common for courts to allow plaintiffs to amend their complaints. Here, well before the lawsuit goes to trial, legal fees and expenses start adding up.

Discovery is the process by which relevant information is shared between the lawyers for the plaintiff and defendant (and at times requested from third parties).

Discovery is the process by which relevant information is shared between the lawyers for the plaintiff and defendant (and at times requested from third parties). The discovery process typically includes interrogatories (questions submitted for response), request for production of documents relevant to the dispute, and depositions of the plaintiff, defendant, and potential witnesses. In complex cases, discovery also may involve submission of reports by expert witnesses. With techno- logical advances and no shortage of mediums for communication, there is quite a bit of data to be shared. Between emails, computer files, text messages and phone calls, and data storage devices, discovery can be an expensive undertaking. In fact, in mid-sized cases , discovery is estimated to cost about $3 million. It is often the longest part of the litigation process. After discovery ends, either side may file a “motion for summary judgment,” through which a judge may find that the plaintiff or defendant wins all or part of the case, based on undisputed facts. If factual disputes prevent such a decision, then the case goes to trial.

Most civil cases that go to trial are decided by juries. At the conclusion of the trial, the judge instructs the jury, providing it with specific questions that it must answer based on the applicable law.

What happens at trial?

Most civil cases that go to trial are decided by juries, which serve as the “finders of fact.” The size of juries in civil trials varies from state to state, with some providing a full 12 person jury plus alternates, and others providing for a small number of jurors, frequently 6 members. At the conclusion of the trial, the judge instructs the jury, providing it with specific questions that it must answer based on the applicable law. The average jury trial lasts about four days, but complex trials can go significantly longer.

The jury’s answer to the questions posed by the judge is the verdict. The jury weighs the evidence presented at trial to reach a conclusion on the facts.

How does the jury reach a verdict?

The jury’s answer to the questions posed by the judge is the verdict. The jury weighs the evidence presented at trial to reach a conclusion on the facts. Its findings are typically based on a “preponderance” of the evidence, meaning that it is “more likely than not.” This is a significantly lower standard than the “beyond a reasonable doubt” standard used in criminal trials. Only about one-third of state courts require a unanimous verdict in civil cases.

After the jury reaches a verdict, the judge is tasked with applying the jury’s factual findings to the law before entering a judgment.

What is a judgment

After the jury reaches a verdict, the judge is tasked with applying the jury’s factual findings to the law. For example, if a state legislature has enacted a limit on the size of an award for pain and suffering and the jury’s award exceeds the maximum amount, the judge will reduce the award in accordance with the law before entering a judgment.

A party may appeal a decision if they believe there was an error in the interpretation or application of the law. Here, briefs are filed on each side and oral argument may be held.

What goes into appealing a court decision?

In most states, a defendant with an outstanding judgment must pay a bond to suspend collection of the judgment while it appeals a decision. (See the section on Appeal Bond Reform for more information.) Appealing a decision typically involves each side filing briefs arguing whether there were errors made by the trial court judge in interpreting and applying the law, or in ruling on the admissibility of evidence. The appellate court may hold oral argument in which each side presents its argument and answers the judges’ questions. This process may take anywhere from a few months to several years.

A lawsuit can be settled out of court at any point during litigation if the parties reach an agreement.

When do cases settle?

A lawsuit can be settled out of court at any point during litigation. A court may attempt to facilitate a settlement through asking the parties to agree to mediation.

is it true that most lawsuits settle?

Yes, an overwhelming majority of cases settle. Most estimates find that somewhere between 95 and 98 percent of cases settle. But that doesn’t mean that legislative reforms are any less impactful. Meaningful and fair laws on the books create an important framework to encourage appro- priate settlement.

Compensatory damages, including economic and noneconomic damages, are the most common damages awarded in a lawsuit. Courts may also award punitive damages to punish misconduct. Plaintiffs can also obtain injunctive relief, which is a court-ordered action or prohibition.

Economic damages are the amount of money that will fairly and adequately compensate a plaintiff for measurable losses of money or property caused by the defendant’s fault. Economic damages include reimbursement for such items as medical expenses, lost wages or other income, and property damage.

Non-economic damages are intended to provide monetary relief for aspects of loss and harm that cannot be precisely measured. They can include recovery for such things as pain and suffering, emotional distress, loss of companionship or consortium, and loss of enjoyment of life. Given the highly subjective nature of non-economic damages, and the significant public policy implications of rising awards, about two-thirds of state legislatures have adopted reasonable limits on such awards either in medical negligence or all personal injury cases.

Punitive damages may be awarded against a defendant whose conduct was particularly egregious. These damages are not intended to compensate a plaintiff for an injury, but are used to punish the defendant and deter future similar activity. Punitive damages may be awarded when the defendant acted with actual malice toward the plaintiff, showed deliberate indifference or reckless disregard for the safety of others, or committed fraud. Most states require juries to find “clear and convincing” evidence of such misconduct to support an award of punitive damages, a standard that is stricter than the “preponderance of the evidence” standard ordinarily used in civil trials but not as strict as the “ beyond a reasonable doubt” standard required for criminal convictions.

A significant portion of lawsuit awards against companies are paid by their insurers where they have insurance policies, but businesses also incur expenses. Most insurance coverage has a policy limit, awards above which must be covered by the business. Small businesses, on average, directly cover about a quarter of their litigation costs. This does not include the higher insurance premiums paid once a business faces litigation.

A class action is a tool of judicial economy that aggregates the claims of a large group of plaintiffs into a single lawsuit. One plaintiff’s claim then represents all members of the class. Generally, class action status—called certification—may only be granted by a judge if the number of plaintiffs is so large that it would not be practical to try each plaintiff’s claim individually, and if the plaintiffs have claims in which common issues of law and fact predominate.

An expert witness is a witness whose specialized knowledge, skills, or experience will assist the jury in understanding complicated subjects unfamiliar to the average layperson. Expert witnesses are generally allowed by the court to speak authoritatively, and to offer opinions, based on their specialized skills or training. Other witnesses can testify only to fact, not opinions.

Medical malpractice is misconduct by a physician, usually negligence. To win a medical malpractice lawsuit, a plaintiff must generally establish: 1) the physician had a duty to the patient; 2) in satisfying his or her duty to the patient, the physician violated the applicable standard of care; 3) the plaintiff has an injury for which the plaintiff is entitled to compensation; and 4) the physician’s conduct caused the plaintiff’s injury. Medical liability, a related term, generally refers to more general health care litigation that may include hospitals, nursing homes, pharmaceuticals, or health insurers.

Product liability refers to the legal liability of product manufacturers and sellers to compensate consumers and users for damages or injuries suffered because of the purchased product.

A statute of limitations is a law that prescribes a certain window of time after a criminal act or civil wrong occurs during which an action must be brought.

A statute of repose is a window of time after which a party is no longer responsible for a previous action. Statutes of repose are often applied to products or actions by professionals. 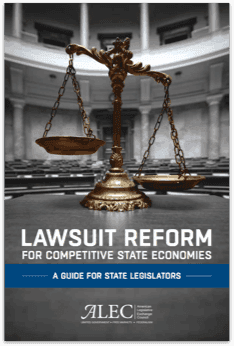 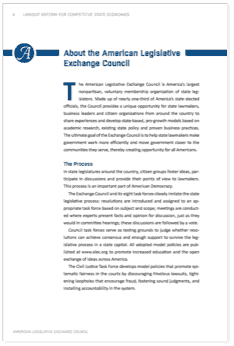 Stay up to date on State Lawsuit Reform! Sign up and receive important news every week.